Over the years, our commitment to quality custom metal fabrication has allowed us to confidently offer a wide range of products and services, from our early days as Kelowna Machine Shop, to our current level of manufacturing and repair services, to our own line of truck snow plow assemblies.

Monashee was originally started in 1935 by George Sexsmith, and was located in the 400 block of Lawrence Avenue behind an industrial supply store. The original name of the company was Kelowna Machine Shop. 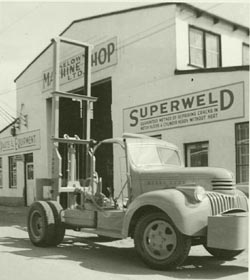 In the 1940’s the company moved to what was then ‘out of town’ to its present location at 1247 Ellis Street. The name was subsequently changed to Kelowna Machine Works around 1960, and then again in 1967 to Monashee Manufacturing Corporation Ltd.

In the 1930’s, 1940’s and early 1950’s the company provided repair service and manufacturing to the local economy. The majority of the work was for farms, sawmills, the City of Kelowna and most of the local businesses. One project of note would be the construction of the Athens 10 meter diving tower that was the hub of the Kelowna International Regatta.

In 1965 Kelowna Machine Works started making the famous Timber Toter Skidder. At that time, some purchases were made direct from Detroit Diesel and Clark Equipment in the USA. This would be unheard of in today’s markets because of such low volumes.

It may be noted that a 4-53 Detroit engine or a 17600 Clark axle was purchased laid into Kelowna for $1,100 each!Skidders were shipped to Alberta, British Columbia, Washington, Oregon, California and as far away as Malaysia and Australia. Also in 1965, we started manufacturing Mobile Cranes of which the local Western Star plant purchased one of the first units.

In 1968 Monashee started manufacturing Root Rakes for northern BC for use in primary land clearing. In 1980 through to 1982 , 200 Inland Mobile Platforms (IMP’s) were manufactured. They were primarily used orchards for pruning and picking fruit. 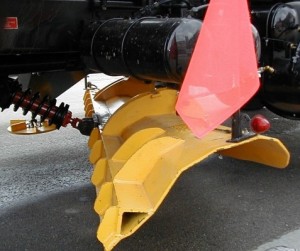 In the 1990’s Monashee started actively producing its own line of truck snow plow assemblies. To date over 1000 Under Body Plows are clearing highways and urban streets. These heavy duty under body scraper-plows withstand the most demanding and punishing highway use and is still efficient for use on urban streets and rural roads. The long life span and low maintenance cost has delivered a proven track record of success.

The company has supplied and serviced local, provincial and export markets from its present location in Kelowna since its inception.